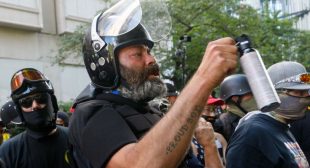 We need to make sure we’ve got assaults on video,” Swinney says in the leaked footage. “If we’ve got [an assault] on video and stuff, and we know we got it on video and we have several on video, then nothing is going to happen because we just show the judge the video.” In other videos, captured by Swinney himself, he admits to macing dozens of anti-fascist activists.

This made an impact on the jury in revealing that Swinney had planned attacks ahead of time and simply viewed claims of self-defense as a ruse to justify violence against anti-fascist demonstrators.