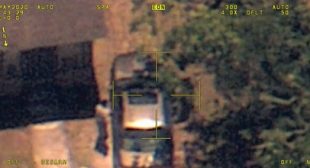 The FBI’s secretive spy plane program targeted a man in Florida last year with nearly constant surveillance, logging more than 400 hours in the air with a fleet of Cessna aircraft registered to what appear to be front companies.

This aerial surveillance, described in a filing made Monday in federal court, reveals for the first time the FBI’s enormous capacity to target a single individual inside the United States for prolonged monitoring using aircraft.