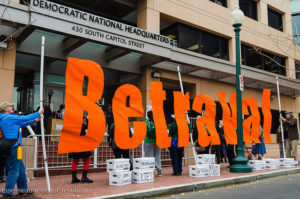 Protesters dressed as movers charged the door of the Democratic National Committee (DNC) headquarters today, trying to gain entrance to the building. Security fended them off and barricaded the front steps.

Protesters drove up in a U-Haul van wearing blue jumpsuits. They carried cardboard boxes and wheeled a hand truck to the front door, claiming they were hired movers. They unfurled a large banner reading “Betrayal” and recited chants such as, “We want democracy, not corporatocracy!” They alleged that the Democratic Party, headed by the DNC, has “sold out” to corporate interests, and corruption played a part in the Party’s election defea