CIA director beat up his deputy in front of Obama 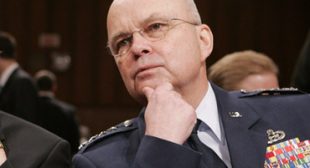 Former CIA Director Michael Hayden found an unusual way to show President-elect Barack Obama how the agency’s interrogation techniques worked during a December 2008 briefing: Hayden beat up his own deputy in front of the future commander-in-chief.

Kill or Capture is Daniel Klaidman’s new book released this week, and in it are up-close accounts of how the Obama Whi