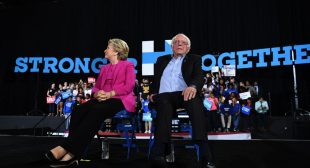 Nobody worried about fake news when it helped Hillary Clinton.

The Bernie Bros narrative has been largely debunked as a myth, and Sanders’ campaign was whitewashed to silence his diverse supporters. It wasn’t fake news outlets driving these narratives, but rather mainstream media outlets.