‘An American Caesar’: How the right wing is embracing dark ideas once considered ‘unthinkable’ 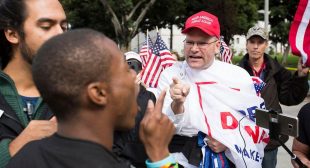 Donald Trump was hardly the first U.S. president to voice his support for authoritarians. But while President Richard Nixon saw it as practical to have an alliance with Spain’s dictator Gen. Francisco Franco — arguing that at least El Generalísimo kept Soviet troops out of the streets of Madrid — he never praised Franco as a role model for the United States. Trump and his loyalists, in contrast, have openly praised far-right authoritarians like Hungary’s Victor Orbán, Turkey’s Recep Tayyip Erdogan, Russia’s Vladimir Putin and Brazil’s Jair Bolsonaro.

This open admiration for authoritarianism among Trump supporters is the focus of articles by The Bulwark’s Charlie Sykes and Vox’s Zack Beauchamp. Sykes, a Never Trump conservative, has stressed that one doesn’t have to be a liberal to believe in liberal democracy — and he warns that democracy is something that the MAGA right is outright contemptuous of.