Americans have forgotten what we did to North Korea 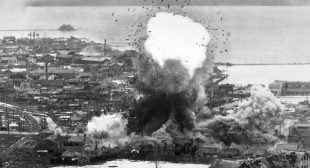 In the early 1950s, during the Korean War, the US dropped more bombs on North Korea than it had dropped in the entire Pacific theater during World War II. This carpet bombing, which included 32,000 tons of napalm, often deliberately targeted civilian as well as military targets, devastating the country far beyond what was necessary to fight the war. Whole cities were destroyed, with many thousands of innocent civilians killed and many more left homeless and hungry.