2009: The year the Democratic Party died 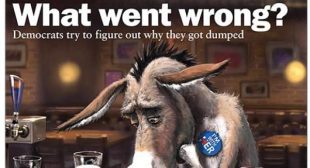 The Democratic Party has been obliterated. Hillary Clinton’s narrow loss to Donald Trump was the shock felt ’round the world, but there’s been an even deeper decline in the Democratic Party at the state and local level. The Obama administration has overseen the loss of roughly a tenth of the party’s Senate seats, a fifth of its House and state legislative seats, and a third of its governorships, something which hasn’t been seen since the repeated routs of Republicans in the 1930s.

There are unquestionably many factors behind this result. But I want to focus on the biggest one that was completely under Democrats’ control. It is the same thing that killed the Republicans of Hoover’s generation: gross mishandling of an economic crisis. Democrats had the full run of the federal government from 2009-10, during the worst economic disaster in 80 years, and they did not fully fix mass unemployment, nor the associated foreclosure crisis. That is just about the most guaranteed route to electoral death there is.