The man who could doom Internet: Ajit Pai ignores outcry from all sides 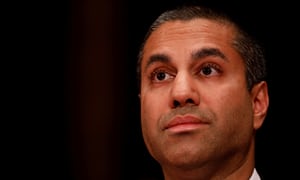 Over the last few weeks, critics have attacked Ajit Pai online, protesters have covered his house in cardboard signs and he has publicly squabbled with celebrities including Alyssa Milano, Mark Ruffalo and Cher.

Why? Because Pai, the chairman of the Federal Communications Commission and former Verizon lawyer, plans to scrap Obama-era net neutrality protections and is ignoring widespread outcry against it.

According to multiple polls, members of the public across the political spectrum support the net neutrality rules, which are designed to ensure that internet service providers treat all websites equally and are not allowed to block, throttle or prioritise some content in return for payment.

In fact, the main support Pai has for the rollback comes from the handful of powerful broadband companies that stand to benefit, including Comcast and his former employer Verizon, who argue that the rules stand in the way of innovation.

“He seems to be under the thrall of very powerful business interests in Washington to the extent that he is dismissive of all other arguments,” said Timothy Karr, campaign director at Free Press, “any input that would in any way upset his entrenched views about helping these powerful cable companies.”