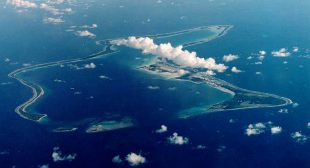 The US Navy has been discharging sewage and waste water into the British-owned and protected Diego Garcia coral lagoon since the 1980s, according to a new report by the UK-based Independent.

The base in question – located on the Chagos Islands in the Indian Ocean – has been the focus of intense lobbying by supporters of the native residents, who were resettled elsewhere in the 1970s in order to make way for a US naval establishment. The British government has stated on multiple occasions that those Chagossians could not return to the island due to its effort to maintain the area’s unspoiled habitat.

Despite these claims, however, scientists have found the state of the coral in the lagoon to be deteriorating, and have singled out increased levels of nitrogen and phosphate as the possible culprits. According to the Independent, the presence of these elements is likely the result of the US Navy dumping treated sewage water and other waste into the lagoon for the last three decades.