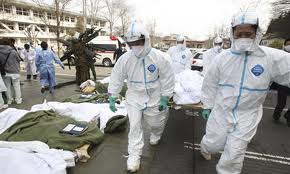 The amount of radioactive materials released in the first days of the Fukushima nuclear disaster was almost two and a half times the initial estimate by Japanese safety regulators, the operator of the crippled plant said in a report released on Thursday.

The operator, the Tokyo Electric Power Company, said the meltdowns it believes took place at three reactors at