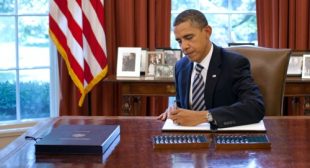 he Monsanto Protection Act, essentially both written by and benefiting Monsanto Corporation, has been signed into law by United States President Barack Obama. The infamous Monsanto Corporation will benefit greatly and directly from the bill, as it essentially gives companies that deal with genetically modified organisms (GMOs) and genetically engineered (GE) seeds immunity to the federal courts, among other things.

The bill states that even if future research shows that GMOs or GE seeds cause significant health problems, cancer, etc, anything, that the federal courts no longer have any power to stop their spread, use, or sales.