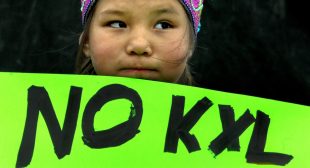 “Our communities have been fighting KXL for over a decade, tooth and nail, in the dirt and in the courts.”

“A huge victory for Lakota and Indigenous front liners and Water Protectors. None of this would have been possible without their sacrifices,” Nick Estes, a citizen of the Lower Brule Sioux Tribe and an assistant professor of American studies at the University of New Mexico, tweeted in response to Biden’s reported plan for Keystone XL, a sprawling $8 billion tar sands project that the Trump administration repeatedly sought to advance amid legal challenges and widespread grassroots resistance.