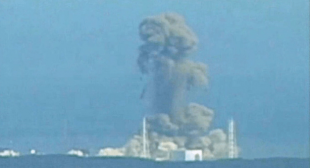 Radiation levels inside a damaged reactor at the Fukushima Daiichi nuclear power station are at their highest since the plant suffered a triple meltdown almost six years ago.

The facility’s operator, Tokyo Electric Power (Tepco), said atmospheric readings as high as 530 sieverts an hour had been recorded inside the containment vessel of reactor No 2,…

The recent reading, described by some experts as “unimaginable”, is far higher than the previous record of 73 sieverts an hour in that part of the reactor.

Tepco also said image analysis had revealed a hole in metal grating beneath the same reactor’s pressure vessel. The one-metre-wide hole was probably created by nuclear fuel that melted and then penetrated the vessel after the tsunami knocked out Fukushima Daiichi’s back-up cooling system.