The Rise and Rise of the Super-Rich 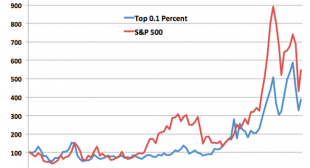 It tells a three-part history of our economy over the last century. It’s a story about the age of the rentiers, their retreat, and subsequent return.

By 1913, the robber barons were in relative twilight. The so-called “malefactors of great wealth” had suffered a series of political setbacks over the previous decade — from Teddy Roosevelt’s trust-busting to the