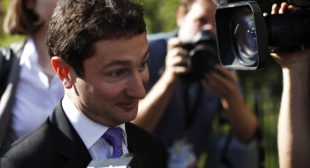 The former Goldman Sachs vice-president Fabrice Tourre, who was convicted on six counts of securities fraud six months ago, has landed a new job as an economics teacher at a prestigious university in the US.

Tourre, also known as “Fabulous Fab,” will teach a class called ‘Elements of Economic Analysis’ on Thursday afternoons, followed by a discussion on Monday.

His teaching stint will be part of his pursuit of a doctorate at the university.