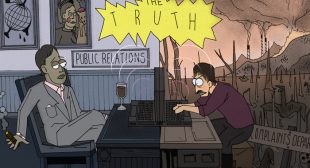 The internet may be great for you, what with its Movshare links and fascinating “Which Game of Thrones character are you?” quizzes, but please spare a moment to think about those poor souls in the corporate PR and lobbying game, the flacks who get paid fat wads of cash by some of the worst people in the world to make sure that governments see things their way. In the old days, these champions of murderous dictators and big polluters were able to talk politicians round to their way of thinking over boozy lunches in opulent private members’ clubs. Nowadays, they’re forced to do the devil’s work in the harsh glow of a laptop screen rather than the more persuasive atmospheres created by soothing candlelight and expensive whiskey.

In recent years, the lobbying game has changed thanks to social media websites, citizen journalism (described by one lobbyist as “a major irritant”), and online petitions capable of getting millions of signatures in a matter of hours.