Populists Are on the March in the South: Bernie-Backed Insurgent Randall Woodfin Defeats Birmingham’s Incumbent Mayor 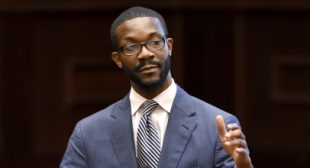 But populist challenger Randall Woodfin, a 36-year-old former board of education president endorsed by the Bernie Sanders-backed campaign group Our Revolution, topped Bell in the first round of voting in August. On Tuesday night, Woodfin finished the job in the runoff, stunning Alabama and winning the mayor’s race comfortably — Woodfin defeated Bell with 58 percent of the vote.

“We sent nearly 8,000 get-out-the-vote text messages to supporters and sent over 70 volunteers to his campaign,” Diane May, communications director for Our Revolution, told The Intercept about the group’s support for the candidate leading up to the first round. In advance of the runoff, they made over 1,000 calls and sent 11,000 text messages to voters. Sanders himself phoned in robocalls for Woodfin.