Hunger in Wirral: the truth behind the tale that made a Tory MP cry 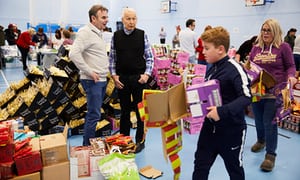 It was the true story that moved a Tory to tears: Heidi Allen, Conservative MP for South Cambridgeshire, wept after Frank Field, the veteran Labour MP for Birkenhead in Wirral, told parliament of the hungry constituent who said he had had “a lucky week” because his family had been invited to a funeral and so could eat the food left over after the wake.

A few days later, Field was back in Birkenhead, immaculate in a checked shirt and tank top as he surveyed a scene of organised chaos in a sports hall at the Hive youth centre. Around him, volunteers scurried hither and thither to fill Christmas hampers for Wirral’s most needy.

Four years ago, they delivered 70 hampers. “This year we are doing 3,000,” said Ema Wilkes, who runs the Neo community cafe and social supermarket in Rock Ferry, one of the most deprived wards in Wirral. “People look at this and say: ‘Isn’t it brilliant what you’re doing?’ But I get really upset: this project should be getting smaller, not bigger.”