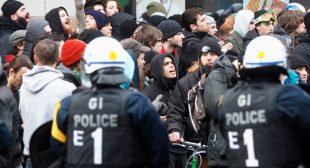 Canadian police surrounded an annual protest against police brutality in Montreal, arresting 288 people before the demonstration had barely started.

The police claim the protest was ‘illegal’ as the participants did not warn the authorities of their itinerary.

Montreal’s 18th annual protest against police brutality was cut dramatically short Saturday when police rounded up the participants. Minutes into the demonstration, riot officers converged on Jean-Talon Street and began detaining protesters. According to protesters there was a strong police presence, with police horses, cars and a helicopter on the scene.